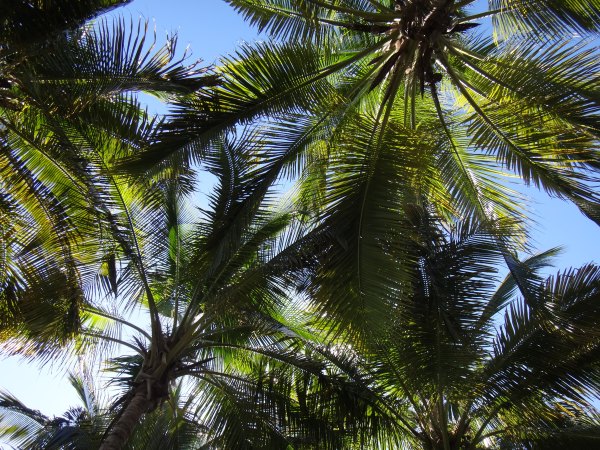 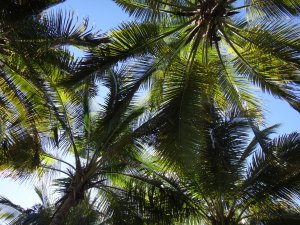 Oh my goodness, I still have a fest hangover from Siavonga and while I did drink my fair share (coughs a few times) I also danced and enjoyed myself way too much. My whole body has a physical hangover from the 3 days of madness.

I set off for Siavonga with one of my girlfriends at 8am on Friday and got there around 12pm thanks to some bathroom breaks and a few road works diversions. We were staying at Lake Safari Inn and did the package deal which was 3 festival tickets, 3 sunset Cruises, the boat to and from Eagles Rest and Lake Safari where the two stages were.

Lets cut to the chase over the next 3 days my buddy Lulu was the MC and I got to see everybody from Cactus Agony, Mumba Yachi,  Pompi, Eliftharios Mukuka and Abel Chungu did a crazy House set. There were bands, an acoustic stage, dj’s, rappers, singers just about every kind of artist you can imagine. My friends and I danced in the sand and got to meet really cool people. It was definitely a fest to remember, let’s get to the fashion stuff shall we… 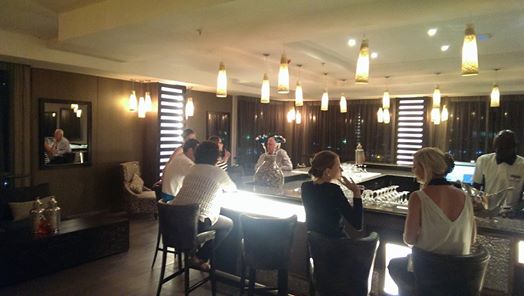 A while ago I had the privilege of attending the launch for the new Protea Hotel’s rooftop Bar Cloud 9. Located on the 9th floor of the hotel, there is a wonderful restaurant that serves some of the most delicious food. I got to sample the appetizers when I attended the launch and they were quite delicious.

The bar itself is very cozy and well lit with several seating options you can choose to sit by the bar or on their lovely armchairs. The deck is also pretty spectacular with a nice view, I am sure sunsets will look fabulous from there. On the deck there is also a pool for those who love a good swim and a drink in the summertime. It is definitely the new hot spot in Lusaka with its classy aura and spectacular service, go see for yourself.

I have been waiting for Siavonga Festival…since my friends went last year without me while i was stuck working! Its two more sleeps until Friday morning when I will drive up to Siavonga to party with my friends and family.

I am exited to see the likes of my buddy Mumba Yachi, Cactus and Eleftherios Mukuka’s perform. Tickets for the festival are still available for those of you who didn’t buy…come play with me in the sun, sand and water. 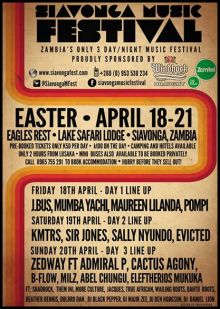 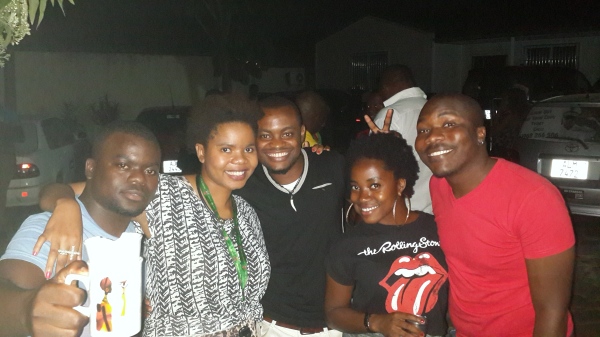 I normally blog about places in Lusaka that you can go to for a great dining experience or fashion experience or club experience. This blog is a bit different today, I am just sharing some photos of my friends and I at their birthday bash. This past Saturday at Rock Fm we celebrated the birthdays of two of our Djs….General Ozzy who does the Hit of Reggae and Dancehall Wednesday nights from 7pm-21:00pm and our boy Mich who is a regular on 3ills House weekdays 6am-9am and his own Saturday show 6pm-21:00pm.

It was a bunch of the Rock FM Djs and family and friends…we are so not normal but I had a blast! I love the people I work with. 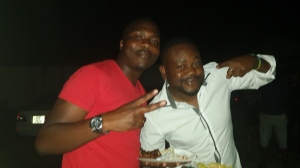 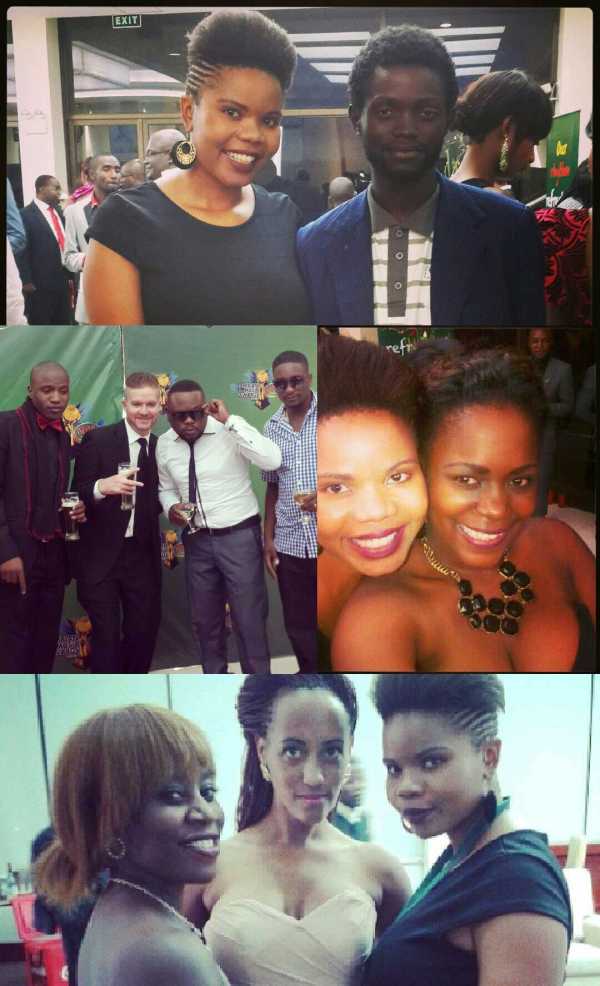 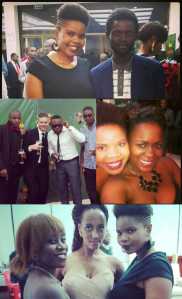 Saturday the 22nd of February were the Zambia Music AWARDS, I was invited or recruited rather by the bosses at Rock FM to go and cover it as press. I got there at the appointed press time 5pm to get ready for the influx of the whose who/celebs of Zambia. As usual people were late but as I mingled with industry folks and took their picture it felt like it was going to be a good night.  I interviewed the lovely Mumba Yachi who won best traditional album earlier in the week and played at the start of the ZMAS. He told me ” Being nominated was overwhelming but at least people appreciate what I do. It was an honor to win”

Somehow I ended up being interviewed by fellow Rock FM Dj Lulu and her co-presenter Tivo, they really just wanted to talk to KB as he was nominated but I ended up in the mix. After a slightly awkward line of questioning I scurried off to interview Salma about her nomination for Best Mainstream Female and conduct the rest of my interviews.

The show was spectacular, from the lighting to the performances I have to be biased and say that  Lota House were my favorite of the night. They closed the show and served up the vocal performance of the night. 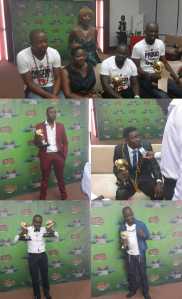 I had a ball in the press room with the guys from Fortress Media and with Stephanie Gondwe. We really should not be allowed to attend events together let alone work at them, we giggled our way through the night and may have had a cheeky glass of wine while at it.

Techtrends Zambia said it right when they said it would have been a place for WIFI, give us wifi  New Government Complex. Let us live tweet and blog and FB and Instagram up a storm it’s only building your brand.

As seen at the golden globes and many an awards show they have a twitter photobooth involving  a tablet that you take a pic on and immediately post and that would have been awesome. We really need to step up our “live” game to social media so that people can have the content they want instantly.

In terms of fashion I will just say big-ups to Lota House, Sandi, Yoko, Lulu, Salma, KB and Tivo…oh and me. The rest….#shade its time to step your style game up. I wore something so basic and boring but still it was better than some of the people. It’s not about money or being bright and colorful, although the women could have tried to be more fashion forward. The men…I mean I don’t know how some of you don’t tailor your jackets/pants in this day and age.

Let me be nice and walk away from this fight!!

Yesterday my little sister and I did what we do best, we randomly decided at about 5:00pm that we wanted to go out for dinner instead of being the health nuts that we usually are. She wanted to try Taco Hut and I was craving something carb driven so off we went down the road to our local Mexican joint.

It was the same very chilled and quiet atmosphere most of us have come to love, I should have had my birthday there last year but thats another story. We ordered our free chips and salsa, we got the medium but upgraded to hot which was nice and spicy enough but for me who can eat fire it was still at a medium level.

I ordered a Margarita while my sister ordered the homemade lemonade, the margarita has become better and for those of you who don’t love tequila it will be perfect. I wish it had more tequila flavor but the use of the homemade lemonade was a good call, on a decor note I love that the chalkboard menus got painted and made more colorful.

We ordered the chicken nachos which wereyummy, I cannot say enough good things about them especially since they were less cheesy that the usual nachos you get at these other non Mexican places. I love me some Queso (cheese) but it was still the best chicken nacho experience. We also got a plate of beef tacos to share which came with a side of rice, this was a less than perfect meal. The rice was a wee bit dry and the beef strips a bit cold but we still at a bit of it, all in all we had a fabulous experience this time around. The waitress could be a bit more attentive but at least she didn’t disappear like the last time, in general Zambia needs to train wait staff…i should just open my company already seeing as I am a former waitress.

I give Taco hut a 7/10 for this time around. We left with left overs and we were laughing and smiling as we walked out. Thank you